The vehicle was handed over to the home during the celebration ceremony of the Jamaica Baptist Union Convention and 165th General Assembly held at the Calvary Baptist Church in Montego Bay.

Directors of Kemtek Development and Construction Company in Tower Isle, St Mary (at front, from left) Garwin, Sylvester and Handell Tullouch, pose with plaques received from members of the Jamaica Baptist Union in appreciation for the company’s donation of a Toyota Hiace bus to the Garland Hall Children’s Home in St James, last week.

Chairman for the Garland Hall Children’s George Simpson and President of the Jamaica Baptist Women’s Federation Esmilda McKenzie, accepted the donation on behalf of the home from the Kemteck’s board of directors.

During a brief handing over ceremony, Kemteck directors Garwin, Sylvester and Handel Tulloch, were presented with plaques by members of the Jamaica Baptist Union, in a mark of appreciation for their kind gesture.

According to McKenzie, the vehicle which will be stationed at the Children’s Home, will result in savings in transportation costs at the facility.

“Whenever the children at the home wanted to go somewhere they had to be paying $15,000 for transportation at the nearest destination, so the bus we have now received will assist us greatly,” said McKenzie, as she thanked Kemteck for the donation.

The Garland Hall Children’s Home, formerly known as Pansy Garden, was completed in 1957.

About 20 wards of the state are currently housed at the home.

ANCHOVY, St James — MEALS for the more than 20 wards of the state at the Garland Hall Memorial Children’s Home in Anchovy are now being prepared in a more comfortable environment.

This, as the Wannabees, a US-based charitable group, recently constructed a kitchen at the institution at a cost of roughly US$8,000.

“We chose this project because from the first time we visited Garland Hall in 2011, we knew we would like to make their lives a bit better by improving their kitchen. It was extremely small, inefficient and inadequate for a home with between 25 and 30 children, plus staff,” Sharon Haver, the head of the group, told the Jamaica Observer West.

The project included the removal old termite-infested fixtures, replacing them with more durable ones and the re-construction of the flooring, outfitting it with ceramic tiles, as well as the installation of new plumbing fixtures.

“First they began busting up the old tile floor in the old kitchen and busted up a cement counter and took out a wall, then they framed up the floor area of the new section. Then everybody got involved by forming a line and passing buckets of sand and rocks up the hill to the new section. All the Wannabees and the children at the orphanage helped,” said a member of the group, referring to the first day’s work on the project.

“I can’t even find words to express our gratitude. We are so, so happy and I really want to thank them (the Wannabees) for their assistance. Now, we are very comfortable because the space we had was very, very small,” she explained.

Since then, additions have been made to the facility, including a sick bay, boys’ dormitory, matron’s quarters and a multi-purpose area.

“We really love the children and staff at Garland Hall. What is so remarkable about them is their positive and loving attitude, while having so little. The children don’t have parents to tuck them in bed at nights or many of the other things that parents do, but we never hear them complain,” Haver argued.

She also lauded the director of the facility for her role in caring for the wards of the state under her care.

“Miss Smith does an outstanding job as director of the home. I don’t think most people realise what it takes to care for that many children seven days a week and what she and other staff members sacrifice by not being able to be home with their own families,” she emphasised.

Haver told the Observer West that she has been bringing groups to the island since 2009. Since then, she said, the Wannabees has undertaken a raft of projects at several children’s home across St James.

These include a major contribution to playground equipment and the provision of strollers to the Blossom Gardens Children’s Home; the donation of a desk, weed eater, clothes and other items to Westhaven Children’s Home; and the construction of a bathroom at Garland Hall Children’s Home.

The Wannabees has donated a refrigerator to the Good Samaritan Nursing Home in Anchovy and has painted the buildings at Garland Hall.

The Wannabees began as a Bible Study and Mission Group in 2003.

In 2009, while on a family vacation in Jamaica, members were introduced to the needs at several children’s homes in St James.

“Our first mission trip was in July of 2009 and since then we have had eight groups travel to Jamaica to love the children and help in other ways. Our primary purpose is to love the children, spend time with them and show them that God loves them. We are a small organisation with a lot of love to share,” Haver said.

The YB Afraid Foundation, started by Yohan Blake in 2011, works to support Organizations and develop programs that address the educational, physical and mental health and social need of underprivileged youth.
The foundation built a multi-use sporting facility inclusive of a well-equipped playground for the children in summer 2014. They have done an outstanding job, the quality of the gear is very high and robust and everything was planned and done highly professional. This surely is a mile stone for the development of the children’s home, that cannot be valued enough. 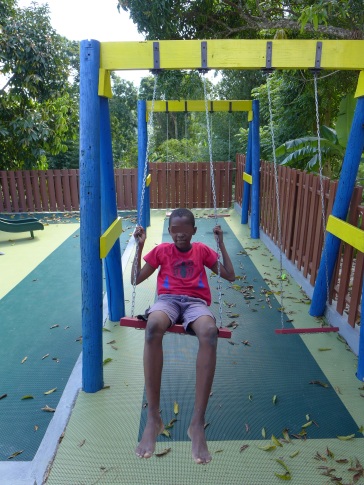 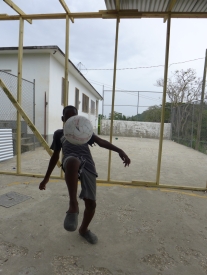 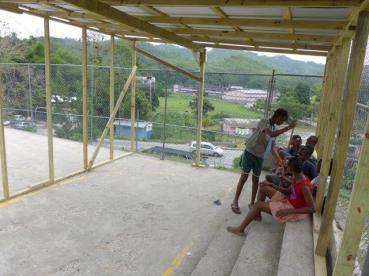 shelter from the sun (old field)

During one of my last stays I happened to have my birhtday party at the home.

So I decided to organize a small party with a jumping castle and a soap sliding contest. 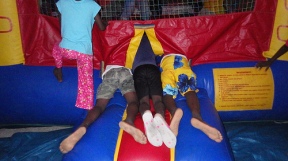 the boys were supposed to stay “outside” as long as the girls are inside…. 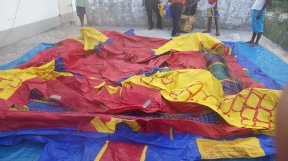 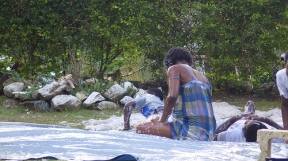 fun for boys and girls

On the 2nd of August the kids attached about 3000 stars to the ceilings of all three dorms. They glow in the dark. It was a lot of fun and now stars and moons sparkle throughout the night.   (author: … Continue reading → 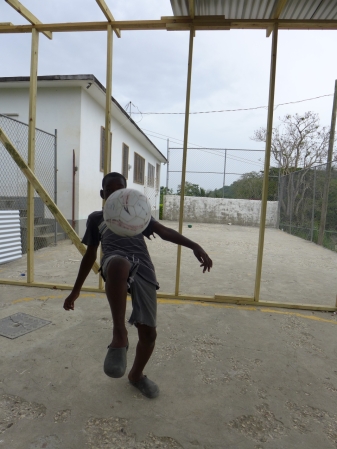 How to find us:

is located opposite of
Anchovy High School